Odin was a powerful god in Norse mythology. He governed the realms of wisdom, cunning, sorcery, and death. Just like Zeus, Odin had the power to transform himself into various creatures, which enabled him to wander about the earth undetected.

I don't have a picture of an eagle, but I do have a number of bird pictures and the question now is - What super power has disguised himself as..... 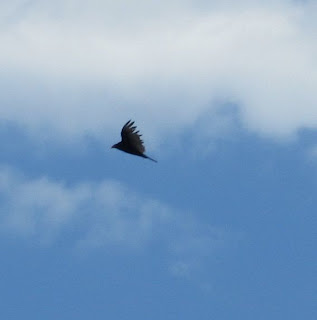 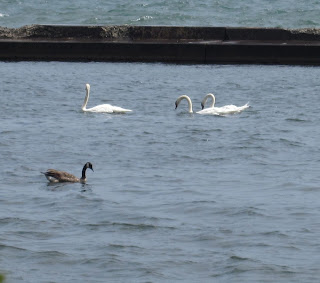 Three swans and a Canada Goose/Gander on Lake Ontario at Sunnyside. Or.... 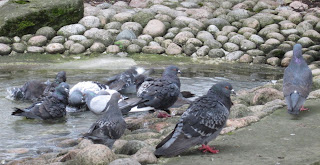 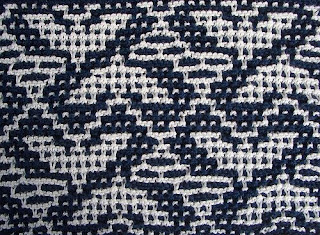 It's done with Mosaic knitting, where you work across a row with one colour and slip stitches from the row below to bring another colour into the pattern. Before I did Fair Isle, I used to do a lot of mosaic knitting.  It has an interesting texture, which lends itself to stylized motifs - not unlike the stories from mythology.

The pattern is too grand for pigeons. It could be geese in "V" formation - certainly a hawk - they are always flying around - keeping an eye on us and I am sure it looks like an eagle - I just have to see one and take a picture.  It maybe easier to just knit a swatch or a whole sweater for that matter :)

Here is a sample of some mosaic knitting I did about 15 years ago.  It's a sweater for my daughter.  I varied the original motif from a Barbara Walker Treasury and created both male & female children/people. Mosaic knitting, mythology, Inukshuks, ancient cultures - they all seem to come together in a few knitting motifs. 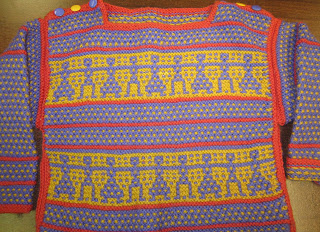 Have a mythical day!!!