When I was taking the video for the previous post, I was hoping that each sail would be opened, one at a time so that there would be this magnificence tall ship, under full sail, cruising off into the sunset, the way it happens in the movies.

Well do movies imitate life?  Or do we expect life to imitate movies.  This is a chicken and egg question. I guess in this case, I was hoping that life would imitate the movies.  Actually, the boat waits until it has cleared a small channel between the mainland and the island airport before it unfurls all its sails. So that would be..townhouses - in the foreground - Pirate ship in the middle and busy island airport behind...alternative film festival maybe.

The phrase "dry bones" had me at first thinking of skeletons and, hence the pirate ship. But then I started thinking of bone rattling experiences. I had nearly dispensed with this idea when I came across a  small bicycle display at The Brickworks. 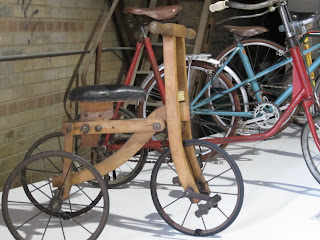 Or maybe it was a display of small bicycles :) Anyway, part of the display included a somewhat new Penny Farthing. 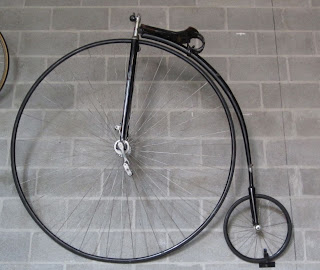 What has this to do with bones? Well it's all in a name, because these curious beasts were also called "bone crushers" in the US - apparently they were so difficult to ride that they literally crushed your bones. Hmmm it doesn't really resemble the stitch, but it is a vehicle.

Actually a quick look up on Google has a video of a bike called a "bone crusher" but it is really a modified Penny Farthing. Here is an interesting video of them.


You decide - pirate ships or bicycles.....I am leaning toward pirate ships - movies have made them romantic - though in real life we know they aren't!!

Have a Block Buster of a day!!