My last few posts have been about a librarian's "Found Poetry" in the lyrical names of knitting stitches. I love it when people (poets) find something so very common; write a poem about it and suddenly it isn't common anymore.  I always remember a poem by William Carlos Williams -

so much depends
upon

beside the white
chickens.

or an urban update

so much depends
upon
a red Honda
covered in
dust
beside black
cats.

hmmmm looses a bit in translation; but it is simple.

The best Canadian prize for prose, the Giller - names are close but not the same - is $50,000.00.  Where in the world would you find someone to support poetry over prose? - well maybe in Canada.  I don't read as much poetry as I used to; but I am drawn to poets and their work.  I am thrilled that poets are getting this kind of recognition. Russell Smith, who has written an article on the Griffen prize in the Globe, had this to say about the world of poetry:

"you need time and patience for contemporary poetry. But entering the refracted world of poetic language, particularly for a few hours at a time, will change the way you see the bus stop and the sunset when you emerge."

and may I add Ikea, Starbucks, streetcars and maybe even plastic bags, now that they have been banned from Toronto - the plastic bag, that is.

Russell Smith goes on to say that the poems of one of the candidates were almost just lists - read "found poetry" - so much is what goes on the list and the juxtaposition of the entries. I wonder if they have added pictures?

Soooo maybe I should just carry on with this blog, compile it into a "listful" publication and submit it.  It may be the first time that two extreme niche markets - knitting and poetry - were merged. It might just double the market.......awesome.

Something simple; but enduring - the King St. car. 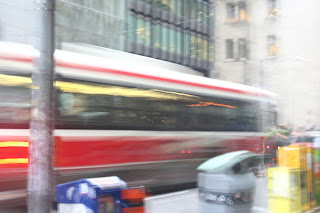 So much depends
upon
a red street
car
clanging by
beside the newspaper
boxes.

Maybe it should have been the Queen car :)

Have a poetic day.