Serviceberries attract birds.  They are hardy and virtually disease free, which means we don't have to spray them.  We water them only in extreme drought conditions, but other than that they are performers.  They have beautiful lacey blossoms in Spring, provide shade through the summer and colour in the Fall.  Their fruit is small sweet and spicey.  This fruit not only attracts birds, but it can also be used by us as a condiment - what's not to love?

I am not sure why it was named Serviceberry. It also goes by a few other names like Shadbush or Wild Plum; but Serviceberry is the one that means the most to me.  Those who plant this tree are good stewards of the earth.  They plant a native variety that positively impacts on the local environment. 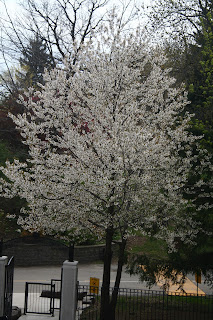 Earth day is upon us.  We need to be reminded from time to time, that we are not the Lords of the earth, we are her handmaidens and as payment for our accomodations here, we tend her gardens, or husband her livestock, or preserve her forests, clean her waters, purify her air, brighten her skies and generally consider ourselves as "in service," for the greater good......

Not a lot about knitting - but as I have said before - They also serve who only sit and knit!!

Have a berry nice day!!
Posted by Carol Tomany at 9:56 PM No comments:

On the naming of cats

I am reading the story of Dewey, the world famous library cat.  My sister-in-law sent it to me from Edinburgh. She is also a "cat" person.  It's the story of a kitten who somehow got into the drop box of a library one bitterly cold night in Spencer, Iowa. I am only half way through what may be an abridged version in large print for children (what was my sister-in-law thinking?). Anyway it's a wonderful story; I may actually get the grown up version.

The head librarian and author of the book named him Dewey - go figure. Actually the name is richer than one might think. Dewey is, of course, from the Dewey Decimal System - somehow Library of Congress just wouldn't have worked. His second name became "Readmore" from a cartoon cat named O. G. Readmore and his last name became Books. Dewey Readmore Books could also be translated into - "Do we read more books?" In the future, I am sure that there will be a Kindle, a Kobe and probably an ICat - is that the same as "Cat's Eyes?"

Cats lend themselves to wonderful names.  "Old Possum's Book of Practical Cats" has some classics - "Jenny Any Dots" is one of my favourites. Feel free to post yours from T.S. Eliot's book. I have written before about Magnificat and Pangra Ban.  In the knitting community, I know of a Mittens (Four Seasons Knitting) and Henry - Lucy Neatby's knitted Wall hanging of her cat Henry and Mary Pat McDonald's cat Hamish....for the most part these are/were all males.  Robyn Gallimore of Red Bird Knits has had so many cats over the years - usually more than five at a time - that I'm afraid  my pea brain couldn't remember many of their names - but they were all lovely!

I once had a black cat called "Princess" and she was one.  I wanted to name one of the three black cats that we have now Diablo - but I let the kids name them and so we have Chloe, Zack and Hunter, instead of Diablo, Beelzebub and Lucifer....must have been a bad week for sales :)

Here is a site that lists the most popular names for both male and female cats. It does mention mittens, plus misty and muffin (2 other cats I've had).  I forgot about Midnight for black cats and I love Oreo for a Jellicle - which begs the question "Could you put jelly on your Oreo?" There is also a Merlin on the list and I have written before about a cat called Marzipan (not on the list; but an "M" name and a treat.)

I did notice an absence of names from the Arts on the list, though.  There were, for example, no Hemingway's, Keats, WB's (W. B. Yeats), Ezra's etc. nor were there Beethovens (oops that's a dog's name), Mozarts, Picassos or Raffis.... What does this say about cats and their owners?

Please post your favourite names for cats and have a nominal - no phenomenal day!!
Posted by Carol Tomany at 1:19 PM No comments:

A Swaddling of lace...

...or a swathing of lace. I had packed a number of scarves in a carryall in preparation for picture taking.  My daughter said that she would be my model, so I wasted no time!  This window of  a good mood can close quickly.  Anyway, the carryall lay on the floor...waiting. At one point I took a look at it and somehow wanted to dive in or wrap myself in all this finery.  Even in a pedestrian black canvas bag, the lace looked rich and elegant, another world, an escape from this one...a little like, through the looking glass, or the door at the back of the cupboard that opens to a Narnia.  If I put on some lace...a lot of lace...will I be transported? 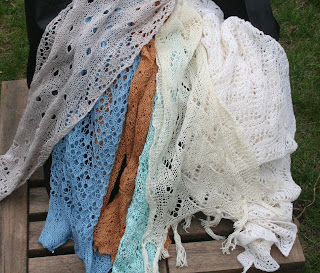 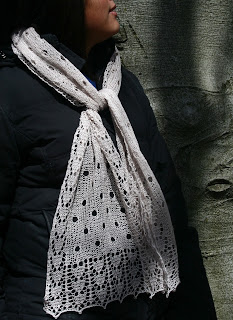 This is Copper Beech, a design based on the bark of the Copper Beech tree.  My daughter is having a word with a copper beech, as we speak :) or write or read.... 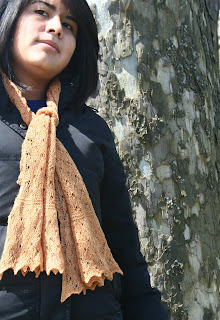 The second is Sycamore Scarf, from the bark of the Sycamore tree - a gorgeous marbled coat. 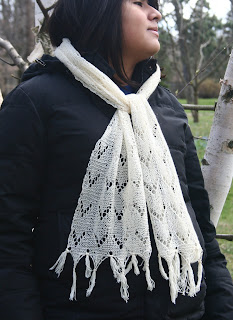 Last of the "Bark Scarves" is Birch Scarf.  I was fascinated with the V shapes of the branches in the clump birches.  The fringe and the picot edge is a nod to the "paper" that peels off the bark of the birch tree. 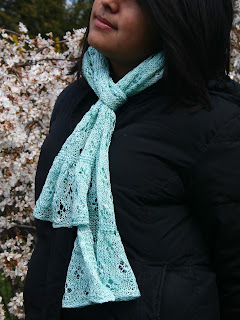 Next is Blossom.  This will be a free pattern of the Queen Anne's Lace Knitting website.  It is a sample knit in Rayanna, our 100% rayon yarn - very "swishy." 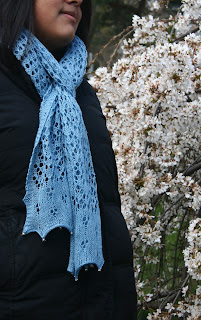 Finally Snowy Evening Scarf.  This was part of the KAL and I have finally got a decent picture to add to the pattern.  Of course winter is over - I said that in a whisper because as all Canadians know, if you say it too loudly, it snows!!

Wear lace and forget about this world!!! 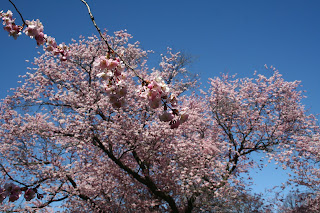 We took a few days off from work over Easter and went for walks.  On Saturday we went to the Botanical gardens in Hamilton. A.K.A. The Royal Botanical Gardens.  The Cherry was in full bloom.  Here she is in all her majesty - no pun intended.

I was also out collecting pictures for a new series of scarves based on the seasons.  I have already started "Rain," which I may call showers in a double pattern named "Showers and Flowers" for the season Spring, of course. 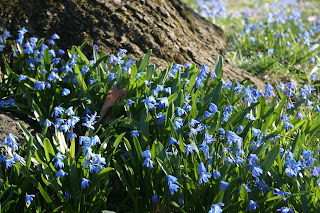 Here is the flower picture that will be the bases of the "Flowers" scarf.  It's Scilla, which was awesome this year! Carpets of flowers, too beautiful to walk on. Think of lying on them; dreaming, going back to an earlier time, an eternal Spring!

Finally some sky pictures to add to my Queen of the Sky scarf. Her picture needs to be re-taken and I also need to post the inspiration for the scarf.  Here it is - streaming clouds in the sky - Lace in nature. 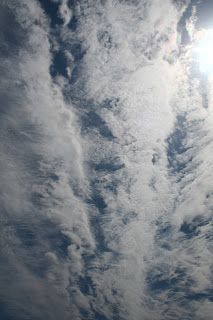 Hope you had a good Easter.  We are having ours today, because my daughter comes back from Dalhousie in a few hours and she actually thought that Easter was on a Monday - well, we call it Easter Monday and Thanksgiving is on a Monday.  Nevermind that my son, when he was younger, called Good Friday - "Lucky Friday."  The religion of Agnostics needs a little adjusting, I think.

Have a Spring day!
Posted by Carol Tomany at 10:32 AM No comments:

I am on a roll....a random roll..... It's Spring and it's baseball season and..and... it's anything else that can be plucked out of the air and assigned a meaning.

1. As I write, I am listening to the Blue Jays opener and we are now in the 16th inning and right now the Jays are ahead and we have our fingers crossed.  I write about this because baseball makes a religion of randomness.  It keeps detailed statistics about things like - how many times a pitcher's hat falls off during an inning...during a game...etc.  We are now into a new statistic - the longest opening game in history - 16 innings and counting....

2. My son was looking for a measuring tape tonight.  One of the soft dressmakers's measuring tapes. Now you would think that in a home where needlework of any kind is a scared art, that there would be a measuring tape.  Well, I somehow could not randomly pull a soft measuring tape out of my elbow no matter how hard I tried :)

However, my husband, who usually can't find his glasses, though they may be perched on the end of his nose said, " go into my car and somewhere between the driver's seat and the passenger's seat you will find and IKEA tape measure.  OK hands up - anyone who randomly keeps IKEA measuring tapes in the front seat of their car.  This is a home where random rules.

I am sure that there are a few more - "go-figures" today - but I probably thought that they were just "normal" read random so they blended into the day and have been lost.

My son was given a second interview for a summer job yesterday.  Now this is in fashion retail, with a chain store, at minimim wage; however, it is at the Eaton Centre in Toronto.  It was a very extensive interview with questions, such as, "do you believe in aliens" and "if you were a kitchen utensil, what would you be?"

Well, my son answered for the later, that he would be a "spork." I'm glad that he didn't say "foon."  Even though it is the same thing. It is a cross between a fork and a spoon. When I asked why he had chosen the spork, he said because it was awesome!  It was a combination of two things that could do much more than either one of the combo. The name spork is catchy and upbeat, whereas foon sounds so much like loon or goon - not good in a job interview.

I think that this situation is a good example of "change the name and you have a new product."  I asked my son, if he had ever heard of a runcible spoon - no, he hadn't. Yet, I know that I had read him "The Owl and the Pussycat" when he was young; it's one of my favourites, possibly because the language is a little antiquated and I love preserving the old way things were said..as in..."they dined on mince and slices of quince, which they ate with a runcible spoon...somehow saying "foon" would just not have cut it,so to speak.

Spork has a Star Trek quality about it.  Would Dr. Spock have used a spork?  Runicible spoon - not so much; but I know that Captain Picard would have read The Owl and the Pussycat. Anyway, the next time that you are in a position to name a product, think of the many overtones and nuances there are to the name you are about to bestow on a shop, a pattern, a yarn shade - spork, foon or runcible spoon could make it or break it!!

I hope that my son gets the job and I hope that you have a prosperous day!! Someone needs to create an icon for the Dr. Spock sign. It too is awesome!!
Posted by Carol Tomany at 8:29 AM No comments: