The last roses of summer....

Well here they are.  I picked them about 5:30pm on Dec 2, 2011. This is absolutely that latest that I have had roses blooming in the garden.  Our last date prior to this one was Nov 27 a few years ago.  I am also in another photo challenge - hope you can stand it.  I posted these for "warm" because it has been warm enough for the roses to bloom this late and we won't see (feel) much warmth in the garden until March, if we're lucky.  Also the rule for picking buds is that they must open in the house (warmth) after picking.  The small one looks a little iffy - but the others look fine. 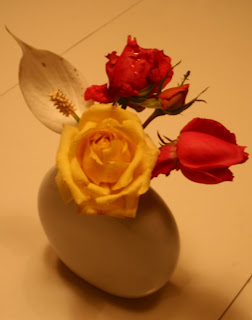 On the knitting scene, I finished sycamore scarf and will block it on Monday.  Also while I was hunting for some knitted jewellery that I included in an earlier post,  I found tucked in bags, along with unfinished knitting projects, several pieces of clothing that I had been looking for - glad I didn't suggest to my daughter that she had taken them by mistake to university - then again what 20 year old would be caught dead in any article of clothing from her mother :)  She doesn't even wear what I knit her :(

Now if I could only get the cats to like the idea of wearing a sweater or two, I could get even with them for bothering the plants!!

Have a wonderful day!
﻿
Posted by Carol Tomany at 4:02 PM