Thou shalt not change thy name.....

I was scouting about for another picture in my photo scavenger hunt challenge, when I walked past the old Chicken Deli now re-named People's Chicken. 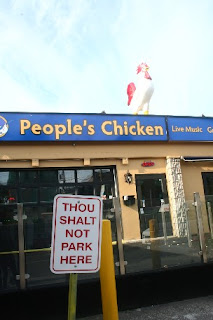 Now Chicken Deli was an institution on Mt. Pleasant for probably more than 30 years.  It used to host "The Climax Jazz Band" and a number of other iconic entertainers. Chicken Deli appealed to people of all ages.  It wasn't just a young people's pub - it was a people's pub.  I never went there, though I am told by friends that on Saturday afternoons, I could bump into people that I knew long before I was married - you know the ones who had never quite given up the bar scene:)

Well about a year ago Chicken Deli closed for renovations and opened up as People's Chicken.  In my opinion a lot was lost in the name change.  I started calling it the People's Republic of Chicken. I don't know; maybe I just don't like change.  The place is still busy.  The chef of the old Chicken Deli is part owner. They kept the rooster....what's not to love.

I like to compare this name change to naming a yarn store.  I think that you can call a yarn store "Yarn Deli" or "Fibre Deli"; but I'm not sure that you could name a yarn store People's Yarn or People's Fibre. I know, if it's your store, you can name it anything you want. But you would want that name to convey the feeling that you have a wonderful selection of gourmet yarns at great prices and offer very personalized service?

Something to think about.  Just as an aside, I would also not have chosen the "church" no parking signs. Something more in keeping with theme, would be better, such as, No Roosting or This Coop is Reserved - that's  if humour is your intent or just keep it simple with "no parking."

I am still undecided as to whether I will submit this photo as an example of the item, "sign" on the list.  I will keep my mouth shut about aperture and shutter speed - not giving me a clear image of the rooster. Here is a better photo, if not a little truncated. 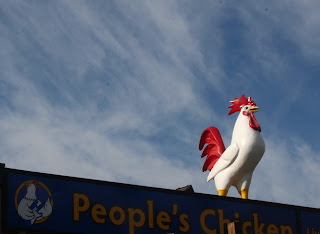 And by the way, the sky is not falling.