Peace is one of the headings in the photo challenge that I am in and I had decided to take the easy way out and photograph a house plant - how difficult could that be.  Let me tell you..... First the plant was a Peace Lily or Peace Plant - right on topic.  Well it wasn't completely in bloom so I had to wait a few days.  Then it decided to be awkward and lean at an angle - kids do that - but plants!!!!

Finally I decided that it was open enough to shoot - with a camera - that is.  Well because of the angle I had to get fairly close to the ground and twist my wretched body into a pretzle shape too look through the view finder. Even then it was so dark and shadowy on the cramped landing that I couldn't actually see the f-stop numbers - how these paparazzi just reel them off?  I don't know!!

The pictures I took were OK - but not great and I had spent an hour before work setting this up....Oh yes, then I had to go to work. I decided to try again the next day.  This time I moved the plant to the living room and tried to zoom in on its peaceful message.  It's a little better - but still doesn't impart that feeling of PEACE that I was after. 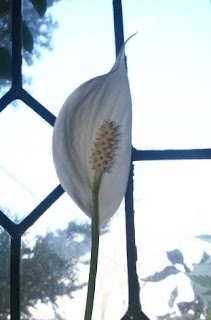 Now I did learn how to turn my flash on manually and how to soften the flash with a tissue over it and how sometimes the perfect subject - well just isn't.....  and how something that I thought was going to be soooo easy just wasn't.

Nor could I find a nice piece of folklore about the Peace Plant...you know something about mother's milk dropping from the heavens and creating the plant - no - dutiful searches on the internet revealed that this house plant was good for cleaning the air of impurities; but that it was poisonous for children or animals - a bit too late to tell the cats, who munch on the leaves all the time.

So here she is looking sooo innocent - don't be fooled...a lily she maybe - peaceful she isn't  :)

Have a peaceful - hopefully - day
Posted by Carol Tomany at 9:10 PM