This is another heading in the scavenger hunt, I am in.  I spent a lot of time thinking and looking for something that would fall under the heading - abandoned.  I walk to the cemetery a lot and there are a lot of seemingly abandoned graves there - this is very sad. 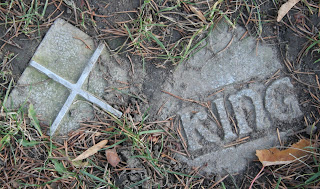 However, I walk past a grave, very often, that is very old; but one would never really call this site, forgotten.  It is the family plot of the "King" dynasty, as in William Lyon Mackenzie King who was the Prime Minister of Canada a few times. Buried here are his father, mother (to whom he was very attached) probably his grandparents and a legacy of aunts, uncles, cousins etc...oh yes, and William himself. 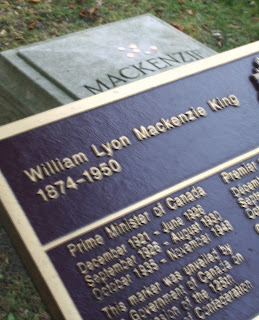 It is actually a very active site. Today there were fresh flowers in a basket near the plaque and for some reason someone or several people had placed pennies on the top of the stone tomb.  Please post if you can explain this phenomenon. I don't think that I actually heard "Will" say, "Spare some change?" But then there are rumours (and I have seen her) of a woman in a flowery hat who frequents the grave often and talks a length to the spirits there.

This doesn't have a lot to do with knitting - but an old poem suggested that Mackenzie King sat in the living room and played with string...I'll take that as a link to knitting.....

I just have 3 more pictures to find in the scavenger hunt - smile, baby and food I am hoping that these will be easier than abandoned.