These photo challenges have definitely forced me to look at "things" in a different way. For example this morning I was thinking about "the picture" and where I would go to take it, when I realized that there were some interesting light patterns on the walls and the appliances in the kitchen. Suddenly my kitchen of 30 years became a fairyland of shifting light.

For anyone who wants time to pass quickly, try taking pictures of shadows - they move very quickly.  In a few minutes a photo opt is gone. 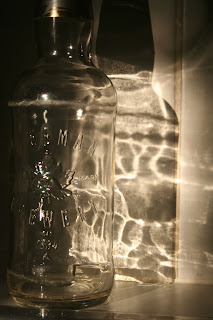 Here is light through a bottle against a tile background. It was on the counter - left there by my husband - beer and ballgames just go together.  He will be going through withdrawal soon - season will be over before you know it :(

Anyway I couldn't resist it. Then I decided to try a cut glass vase. 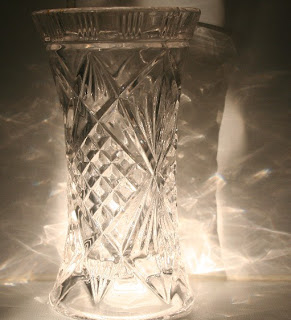 About 10 mins had elapsed between the two shots so the sun was higher and brighter and a certain amount of the definition in the picture was gone. It's still pretty and lacey, but not as moody.

Brighten up your mornings and have a great day!!!!!