There is something about a grey day that forces us inward.  The sun isn't there to lift the spirits and so we look inside for something of interest. Today is a grey day here in Toronto.  I generally try to take an hour's walk, when I can, mostly for exercise; but also for a little quiet thought. Today it was with an umbrella through the cemetery - I know I'm a little suicidal without the sun. 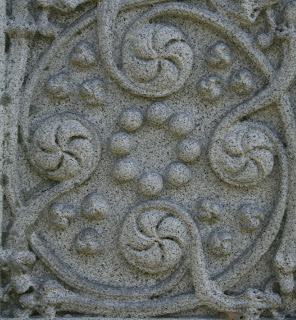 Mt Pleasant cemetery is quite old - not as old as St. Michael's which holds the remains of a lot of the "survivors" of the Irish potato famines - but still there are headstones that date from the late 1880's.  Also other burial grounds, that had to be removed to make way for the expansion of the city, were relocated in Mt Pleasant, so some areas are very old. It is also a cemetery in a once wealthy area, as a result, there are magnificent crypts, ornate markers, ancient trees and winding paths. I have walked through this quiet place many times; I know the stonework well. Yet I have never had a reason to capture it with a camera.

My photo a day challenge gave me that opportunity.  I decided to photograph the delicately scrolled Celtic crosses because they remind me of the intricate cable work in Aran sweaters.  I think I could also work something like this in lace.

We are all connected - past, present and future; etched in stone, beautifully intertwined.
Posted by Carol Tomany at 11:28 AM