It's Sunday morning and I'm cruising the web looking for a link between knitting and life....why don't I just pick up the needles and work on Sagittarius?  Well I do enjoy writing this blog and have written ahead a few posts already for Nov 11 and Nov 25 - significant days. But not much really significant has happened on Nov 6, 7, or 8 in history, that is.

But in the present, my little sale - mainly of discontinued patterns, went well. I found out about a new store in Vancouver that I will introduce myself to - or is it- to whom I will introduce myself.  There is something to be said about the vernacular - no pun intended. And I got to talk to a lot of knitters.  My friend JB - I never know whether people actually want their names mentioned on the internet - came by to help in the afternoon. She had attended a workshop, at the Purple Purl in the morning, on how to photograph your knitting. JB told me about "Light Boxes",  these apparently are a great way to illuminate your samples for photography with out a flash - gotta get one!

Anyway wikipedia searches told me that Duns Scotus had died on the 6th of Nov, a long time ago. He was a philosopher, whose ideas fell out of favour at the time and he was actually the name behind the "Dunce Cap." I happen to like him and the poet he influenced - Gerard Manly Hopkins - but more about them later. I always admire people who press their ideas against prevailing thought trends - but I am always uncomfortable with people who cross on red lights, not sure why.


Anyway, I had hit a wall this morning and so I just decided to read again about Elizabeth Zimmerman and her contributions to knitting. I googled Wikipedia and keyed in her name. It's a lovely read and she died on Nov 30 1999.  I will post more about her then. Well, there were a few pictures that also came up when you keyed EZ straight into google. One was of a lovely Fair Isle sweater designed by her and featured in an old issue of Ornament magazine, which is subtitled "the Art and Craft of Personal Adornment".  Now these pieces are divine!! Here is the sweater I saw. 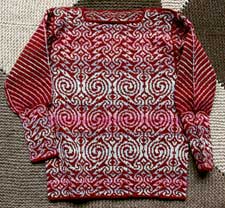 ﻿This is the standard that Elizabeth placed on knitting and this is the standard to which we all must aim. It is not something that a lot of knitters would knit and so if you are in the business of selling patterns and yarn, your sales would suffer. Still we must keep the standard up. I know that there are knitters who just want to relax and enjoy their knitting and not press themselves too much to move beyond their comfort level - this is allowed. But keep the door open. Know there is a whole amazing world of knitting to explore and enjoy. Lets breathe a little life into those afghans!

Dinner?  I have to believe that Elizabeth Zimmerman had Welsh connections her maiden name was Lloyd-Jones. So Welsh Rarebit  perhaps. This is more of a snack then a full meal. Here is another one. I like this one because the introduction said: If you can't get any of the ingredients just use your imagination - someone should teach this guy to knit!!!