Gotta Get A Pawpaw

What's a Pawpaw? Actually, it's a tree that grows well in the Toronto area, which is rather amazing given it's unique name and even uniquer (is that a word?) fruit. Pawpaws yield fruit in September that look like small clusters of round green bananas, which apparently taste like a cross between a mango and a banana - WOW how exotic!  I found out about the Pawpaw from an article this weekend in the Toronto Star. Yes, you learn something new everyday.  Here it is:

The only problem with the Pawpaw is finding a place to plant it.  Most trees need full sun and I have so many trees already in the garden, that there is just enough sun to grow a little Parsley and Basil. I could plant it in the front garden; but then it would grow up and I would lose the roses that are there.

Well these are minor problems compared to the huge problems that others are faced with daily. I think that I'll just put a paw in it!

What does a Pawpaw have to do with knitting, again not much, except that it was one of those Oh Wow! moments, when one says, "I didn't know that!"  It's like finding an elastic cast-off for lace, or discovering a new way to make a buttonhole. Lucy Neatby gives us a lot of those Oh Wow moments in knitting and she has a new (actually revised and very much expanded) book out - Finishing In Style. The retail is $19.95.  It's 175 pages, I know because I mistakenly thought that I was printing the cover from a pdf file only to discover, when the printer didn't stop, that I was printing the entire book on cover stock OUCH!

Lucy's books will be in next week, along with a restocking of Lucy's DVDs which have their own Oh Wow moments! It's fun to try to add an Oh Wow moment as often as possible to your day, week, month....whatever, whenever. I know that there are some who say that you should try something that scares you, everyday - for many it's just getting up in the morning!  I know that I don't do this as often as I should -  push myself beyond my comfort level, that is - I do get up everyday! But, I'm sure that if I had done something everyday that scared me, well, I might be scared to death by now. However, I did have another thought, if you are frightened of doing lace - now is the time to try it!

Here is Mountain Solace. My first lace design. It helped me overcome my fear of doing lace! 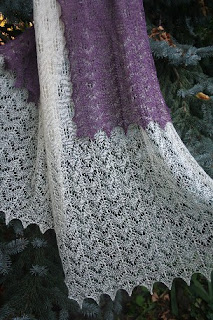 Dinner to-night? How about fruited pork? It's not as scary as it sounds!  Here's the link http://www.tasteofhome.com/Recipes/Fruited-Pork-Tenderloin. I passed up a recipe that had something called "Liquid Smoke" as an ingredient - another Oh Wow - never heard of that before. I think that you could vary this recipe a lot - maybe this could be the scary challenge - OK not every day; but once in a while - just change the fruit!
Posted by Carol Tomany at 12:36 AM