Borscht, I've decided is an acquired taste. I varied the recipe, I posted earlier this month, a fair bit and I did have two helpings (my husband managed one), but you really have to like beets.

This is what I did:
1. I cut the ingredients back by a third - and still had enough to feed the Russian army.
2. I added the vegetables, in order, by the length of time it would take them to cook - I know that I am talking to a seasoned audience - no pun intended.
3. I used just one sausage (health reasons) or I would have used the whole recipe amount and then some.
4. I fried the sausage, onion and garlic and added a little of the tomatoes to the pan to use as a demi-glaze. I, then, added all of this to the pot, including the tomatoes.
5. Next, I added a sachet of beef stock . (I still felt that it needed something!)
6. I pureed everything.
7. It even sat in the fridge overnight!
8. I warmed it up the next day. This is beginning to sound like one of those Russian odysseys - War and Peace anyone? Finally, after ladling it into bowls, I added parsley and sour cream.

Maybe, if I were going to watch Dr, Zhivago, as well, I might have been able to say that it was Fantastic!! I guess I'll just have to try another recipe - 150 million people (pop. of Russia) can't be wrong - but then again maybe it's not about the Borscht.

The other day I saw a picture in the newspaper of a scene from Dr. Zhivago.  There are few films that have really moved me - political ones always do, that's why I never watch them, because I would go to bed angry knowing I were helpless.

However, I watch the romances, the classics and I must say that Julie Christie and Omar Sharif are classic.
http://www.youtube.com/watch?v=WXAa0XaS6bs&NR=1   Here are some scenes you'll remember.

So too are Clark Gable and Vivian Leigh from Gone with the Wind and Julie Andrews and Christopher Plummer from the Sound of Music.  I was also thinking that I ought to re-read Wuthering Heights and perhaps watch Merle Oberon and Laurence Olivier again.  I must be needing a shot of Heathcliff, as it were.

Fiction is the "virtual" of literature and film; it's our escape. I am working my way around the ins and outs of Facebook and I ran into a few glitches today so I guess, I was looking for a place to hide and these wonderful scenes passed through my mind. 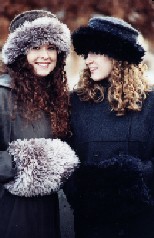 This pattern from Fiber Trends always reminds me of Dr. Zhivago. These are felted hats with an eyelash trim. Its called Winter in the City...or in the Winter Palace. Maybe the secret to having a "divine" pattern is just to have a pictue that reminds people of something famous.

Dinner? I have to redeem myself - I am looking for a good recipe for Beef Stroganoff . This one sounds easy and delicious. And I know that I have sour cream left over. Wow, I can't believe it - write a blog; eat better - who would have thought!

Enjoy
Posted by Carol Tomany at 7:39 AM