Now where is that degree in engineering...? 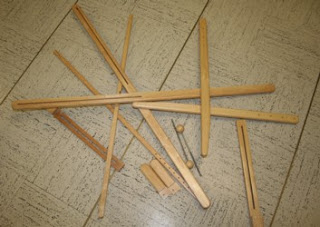 I think I'll need it; because I have to make this on the right, look something like this - below - with or without the sweater. Well actually I started to assemble my woolly board a.k.a sweater blocker a few weeks ago and found that I was missing 3 wooden knobs - now even an engineer would have difficulty with that. 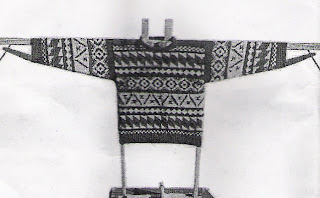 How does the old adage go..? "For want of a knob the sweater was lost.." hmmm doesn't sound quite right. I know the original is - "for want of a nail the horse was lost" - the glory always seems to go to the bigger more important (maybe male) things. Rarely are the labours of women immortalised, even when we seem to be able to make something from nothing - stretching dollars, time, food, housing, sweaters - you name it - let's hear it for stretch marks!!!

OOPs - back to the knobs. I e-mailed Lacis and they quickly responded, sending me the missing pieces in about a week or so. I then spent several hours on the floor puzzling out the frame - not sure it's exactly right yet - but here it is! - even if it looks a little like something from the Spanish Inquisition! 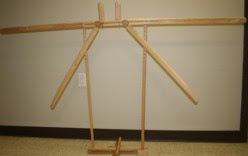 and here is Gifford - martyred upon woolly board.

Actually I really enjoyed knitting Gifford - I hope he isn't in pain. He is knit in Fiddlesticks Knitting's organic cotton, using a stitch pattern from one of Barbara Walker's books. I had mentioned earlier that I wanted something that looked like the beams of an old pub and I think that this comes pretty close to that. It is a gainsey with extended panels and I did take a very liberal interpretation of extended - so we have extended ribbing at the waist and t 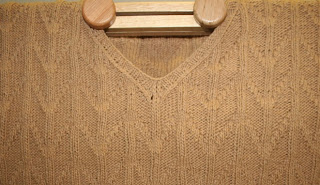 he arms are all ribbing. Of course my husband doesn't wear it because the ribbing is not conservative enough - but it looks great on a female figure - add a belt and away you go!

I have also cast on for my next sweater from "Knitting in the Old Way" - a gainsey with all over knit & purl stitches. Well I did add a little twist here and there because I had ripped out the beginnings of this sweater many, many times. Either the pattern was fighting me or I was fighting the pattern. Nothing was ever "right"!


Finally though something acceptable emerged from the piles of unravelled yarn. But I did have to add some twisted stitches to the all over knit and purl idea. I promise pictures soon.


I will also have pictures, I hope, of the 3 lace scarves and 2 lace stoles that I have finished in between the 5-6 sweaters that I have knit since Jan\07. Well, it is better than drugs - maybe not cheaper and it's probably not as destructive as other addictions (I'm rationalizing). Plus I am knitting a stash rather than collecting one - however, as a non-knitter once asked me, "What are you going to do with all those sweaters?" - She had to ask didn't she.