The detours on the road to Dunbar.... 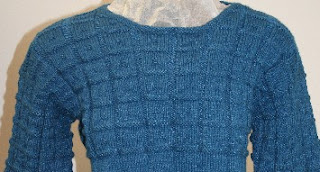 - sounds catchy maybe there's a song with that title.

1. When I had decided to knit Dunbar for my husband I remembered that he liked very traditional sweaters that were not too long with ribbed bands at the waist and neck. This should not be too difficult; should it?....I measured the "model" did a swatch and cast on.

2. With some twists and turns I finished the sweater to the shoulders and tried it on said model - alas - too short. Some how over the 20 something years of our marriage he has managed to stretch out of shape every sweater he has ever owned and as a result he has decided that the "long stretched look" is what he really likes.

3. OK I can cut off the ribbed band at the bottom and knit down an inch or two. Well this would have been much easier, if I had not decided that I had to break the boredom of the plain knitting with a purl stitch every 11 stitches. So now I had to insert a panel of the pattern to lengthen the sweater. Fine, but it was not really what I had set out to do.

4. Finally the sleeves. I have only myself to blame here. I did not realize how long 5 repeats of the pattern would work at the top of the sleeve. It really is too long compared to the body of the sweater. Plus the sleeves should have the pattern band at the cuff to match the 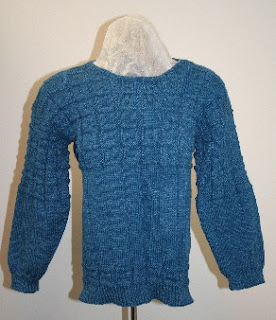 So we back up - rip out the sleeves to eliminate the last two pattern repeats and add a repeat before the cuff. It does give me a chance to improve the sleeve decreases which became a little untidy where the ribbing for the cuff starts.
In the meantime, I have begun my 4th gansey - one with horizontal panels - Pictures soon.

Enjoy Carol
Posted by Carol Tomany at 4:33 PM No comments:

Raising the bar on Dunbar Well... maybe just lengthening it. Let me explain. My third sweater from Knitting in the Old Way is a gansey which I am calling Dunbar - after a fishing village on the south east tip of the Firth of Forth where my husband used to vacation with his parents when he was young.

We've been there many times - for me it's a little like a Land's End because you are so close to the open sea and the wild whims of the North Atlantic.

Well the eponymous sweater also had\has some turbulence - not finished yet. I measured - allowed for ease and cast on 90%, increased to 100% after the ribbing and began an 11 st. repeat - K 10. P1 x 20 for 220 sts. Of course half way up the main part of the sweater, I realized that an 11 st repeat was really dumb. There was no middle st in the panel of 10 knit sts so how was I going to work an interesting pattern in the second part of the sweater. More thought required here.

I finally decided to expand the P1 to P3 after the first "bar" of reverse stockinette and work a little square of purl sts in the middle of the 8 x 10 squares between the bars of reverse stockinette - seems to have worked so far. The neck had to be re-knit a number of times to have it merge with the main pattern - but most of the slog work has been done - except that it doesn't FIT!! Even though I measured it against other sweaters followed instructions and concentrated 90% of the time.

So now I will have to cut off the bottom band, pick up stitches and knit down a few inches; stretch it like mad in the blocking and cut off his beer rations - well maybe the first two will work - we do need a balance in our lives! 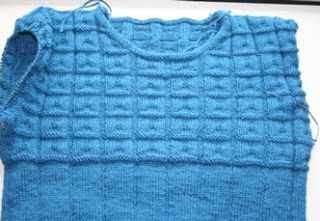 I won't mention several major rip backs for really silly mistakes (and I still have the sleeves to do). Actually I am not complaining - this is just a knitting journey and there are lots of positives. I am knitting with Fiddlesticks Knitting DK Zephyr - a wonderful 50% silk & 50% merino yarn in a fabulous Marine Blue so the more I have to knit the more I have this wonderful yarn slipping through my fingers. And I do get more time to remember "things" like the marinated Halibut we bought at the fishmongers in Dunbar - delicious, the strolls around the harbour, the walks to the ruined castle, the scent of the sea, the fishing boats....

This sweater will probably be an example of a gansey with verticle panels - I had started out with the idea that it would be one of the earlier samples that Pricilla Gibson-Roberts mentions - ganseys with all over knit and purl stitches but that didn't happen. So that means another sweater!