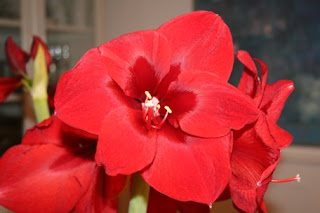 Well it's January 28 and I'm into survival mode - I need to get through the next 6-8 weeks of winter. I know, I complained about the warm weather in January and now I'm going to complain about the cold -20C. But I have survived this month so far because of:

- One dark Benfica - a glorious crimsom Amaryllis that is somewhere between the shades of Garnet and Cinnabar in the lace weight Zephyr (god of the south wind) yarn we distribute.

- Three mini bags of pretzels given to me by a kind stewardess on my flight from Denver to Toronto after I had asked - "I can by food on the flight, right - wrong." It was 11:00am mountain time. I'd left my hotel in San Diego at 4:30am pacific time and was hoping to pick up something before I got to Toronto at 4:30pm eastern standard time - a cup of tea and 3 bags of pretzels would have to do.

- One mini bag of M & Ms given to my by another kind person in the booth across from me at TNNA, when I looked as though I were either going to fall asleep or fall over. It was generally a slow show, although I was very pleased with the activity in our booth!

- Two fabulous sweaters designed and knit by Dorothy Siemens - Fiddlesticks Knitting which I wore instead of a coat to the TNNA show in San Diego because I couldn't fit all the samples in my bag. Well it was 9C when I left and it would be warmer in San Diego, right - well sort of - it was 10C....But it was -9C when I returned. Even 2 fabulous sweaters in DK Zephyr (god of a stronger south wind) couldn't cut that airport cold. (Pictures and patterns soon)

- One almost finished white natroje in said DK Zephyr. More on the progress of this sweater very soon. Below is a detail of the brocade diamond pattern being admired by a very sensitive Amaryllis. Enjoy Carol 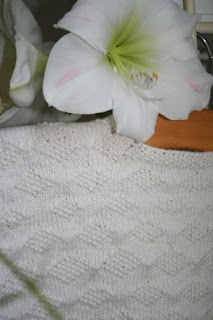