Spinrite or is that Spinwrong? 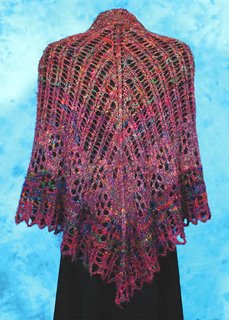 Here is the story of the other dust bunny that crossed my path last week. I came home Friday night to my Oct. 23 - Nov 5/06 issue of Canadian Business and lo and behold there was an article about Spinrite under the heading "Spun Wrong". Now anyone who has ever knit with Patons, Bernat, Phentex or Lily has worked with a Spinrite yarn. Spinrite is a Canadian institution based in Listowel ON, a small farming community about 2-3hrs north of Toronto.

Actually Spinrite started under another name - Perfect Knit Mills sometime before WW I . It capitalized on the demand for wool to manufacture soldiers' uniforms and thrived until its owner, Max Beck, sold out in 1933 - I guess he believed that this was the war to end wars. The new owner renamed it Maitland Mills, which did well during WW II but flounder shortly after. At this point - 1952, David Hay bought it and named it Spinrite Yarn and Dyers Ltd. Spinrite prospered for many years as a producer of yarn for the clothing industry - the "craft industry" - that's us - was a small part of their business.

Well things change. The clothing industry moved their production off shore and Spinrite was forced to take a closer look at their craft side. They bought Patons of Coats Patons to expand the line and started to take a real interest in us!!

The magazine article was actually about private equity firms, income trusts etc. These are large investment houses that buy up firms with money and potential. The Hay family sold Spinrite to one of these trust companies. The trust company then increased the debt on the business substantially- no doubt to pay themselves a lot and their shareholders a little. They based all this refinancing on Spinrite's yarn sales of 2004. That year the company earned revenues of $105 million - everyone was batting eyelashes - so to speak!

Surprise, surprise the next year revenues dropped off sharply and no one could understand why all these woman had suddenly stopped knitting!!! Did I mention that the company was run by businessMEN. They may be able to take out the trash, but they can't take out the stash! Spinrite could no longer support its massive debt.

What amazes me is that they based the success of a multi-million dollar corporation on their divination of the female knitter's psyche, believing that:

1. Female boomers would be knitting more.
2. Younger women, learning to knit, would go on to knit larger projects - scarves to afghans - for example.
3. Fancy yarns would define and drive the market.

I guess that they had never heard of, or chose to ignore, concepts like: fashion trends -very fickle, hand dying, hand spinning, specialty yarns, breed specific yarns, the impact of independent designers, the knitting lists, the knitting blogs, the discounters, China - the list goes on, in a very specific, highly specialized market. And we're the ones who knit all the time. Many pick up the needles once and never do it again!

They gambled on slotting us into a business template and guess what - they lost. At the height of Spinrite's success, their stock traded at $14.00 a share. It is now under a dollar a share.

Time for the CEOs to take a knitting class or at least to understand that although we work with wool, we are not a flock of sheep. We are individual artists creating in our own unique ways. Perhaps our paths just happened to cross in 2004; but now we have moved in different directions.

The pictures are, at top, the Raj Shawl by Dorothy Siemens of Fiddlesticks Knitting. It is knit in Fiddlesticks Knitting Raj Silk, which is a handspun recycled sari silk from Nepal. This is our nod to novelty yarns. It is not eyelash and it is not acrylic. Purchasing this yarn pays disadvantaged women in Nepal enough money to support themselves and th 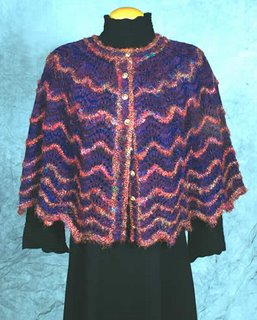 eir families - a novelty in deed.

The other - the Russian Ballet Capelet is also by Dorothy Siemens. It uses Raj and Fiddlesticks Knitting Country Silk. I think what Spinrite missed can be summed up in these two garments. Knitters are not sales generators. They are real people, with real feelings. They understand the needs of others and work through their art to enrich their lives and the lives of those they meet along the way. We are romantics, creating our own special worlds. How could anything this ethereal be captured and manipulated on a spreadsheet.

Dream on, Spinrite. I think that you should have "stuck to your knitting" and run the business, sensibly, as your previous owners had done, rather than lining your pockets with cash, fleecing investors, compromising livelihoods and well destroying a community.

Carol
Posted by Carol Tomany at 10:42 AM