Nuit Blanche - white night - or in our case - wet night (it rained) was an all night "art thing" presented by the City of Toronto with major funding from Scotiabank. Nuit Blanche is staged annually in several European cities - most notably Paris as a way of having a city, its residents, streetscapes and general atmosphere interact with Art - very cool!

I loved the idea and was determined to support it, in spite of the rain. Anything that moves Toronto into the realm of those other special cities is a plus with me!

Basically, downtown was organized into 3 "artistic zones" and artists - many internationally acclaimed - presented their works at various points within these zones. A good number of the exhibits were outside - all the better for that feeling of casual interaction. There is always the hope that once a person is exposed to Art, they will actively seek out more opportunities to interact with it; artists will thrive and the world will improve by embracing artistic vision - well it was worth a try!

Our favourite work was "Fog in Toronto #71624" by Fujiko Nakaya. It was an atmospheric sculpture created by artificially produced water fog. We were children again, amazed at the surreal effects that a little cloud could produce. We had to stand in it; peer through it; move in and out of its folds. It was awe inspiring. This surely was the epitome of Art- to physically and mentally change us. 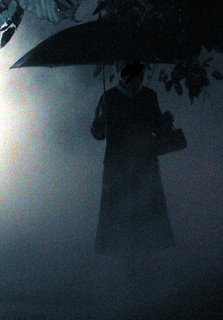 The sculpture was installed just behind the museum in an already sanctified area known as "Philosoper's Walk". The undulating terraine, the dark, and the light rain falling all added to the magic of the experience. Here I am looking more like Mary Poppins than her charges - then again she herself was a magical creature. - now where is that kite?

More on Nuit Blanche later. There were sheep and, of course I had to dress for the occasion which would involve some sort of needlework - art - I use the term loosely.

Carol
Posted by Carol Tomany at 8:50 AM