It is a week after Nuit Blanche and all the reviews are in. It was a huge success ! In spite of the rain, almost half a million people came out to visit Art installations both in doors and out doors - all through the night. Well done Toronto!!

I mentioned in my last post that our favourite installation was Fog in Toronto #71624 by Fujiko Nakaya. It was also the favourite of the photo-journalists - it showed up in all the newspapers. The second favourite was one that we had hoped to see first. "The Apotheosis of the Shadow" by Mario Martinelli- Shadow art against the facade of the Bata Shoe Museum. We were too early - the artist was still setting up - albeit late about 30 minutes after the slated beginning of the "show". Basically the artist trapped passersby between a flash of light and the screen on the front of the building - held their image on a phosphorous panel until another image came by - simple but very effective. The museum itself was closed for a wedding reception - well apparently at about 2:00am, the bride and groom came out and danced in the shadow art - magical!

The third most effective piece, according to one reviewer, was Freeze, 2006. It was presented in a car wash and consisted of 12 waist high blocks of ice. Each block was inscribed with a letter. The letters spelled out "Stonechild", the name of an aboriginal youth who was driven out of a Sasketchwan town one winter's night and froze to death. The blocks of ice, melting into nothingness at dawn, were a chilling statement on a heartless act.

So much of the Art that fascinated us was transitory - shifting fog, fleeting shadows and melting ice - an interesting comment on the human condition!

I had actually chosen to dress for the night in a black skirt and black velvet jacket which I had trimmed with bits of crocheted lace from my mother's sewing basket. Some pieces were done by my mother and others by my grandmother. These are tiny pieces of needlework art that had not only endured, but had found a new life - another magical quality of art - to give permanance to our fleeting time upon this earth. Knit on; create things, many things; be immortalized through your art! 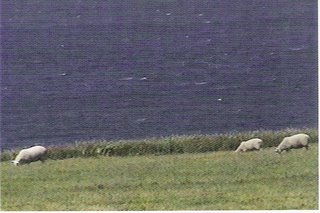 Oh, I almost forgot the sheep. These woolly grazers were projected on the dome of the planetarium in a video loop. Once they reached the edge of the frame, they turned and headed back. It was called "Counting Sheep" by Michael Snow. Evocative of English pastoral paintings - proving again that escape is only a dream away!

Carol
Posted by Carol Tomany at 10:07 AM