Big Business...what do they know?

I've said before, - I love it when "things", interesting "things" happen in clusters, criss-crossing, like - well I would like to say ligtening bolts, but really my life isn't that exciting - how about dust bunnies - in an otherwise ordinary day....well week.

On Wednesday I took my father out to lunch for his 92nd birthday and he insisted I take his copy of Forbes magazine home because it had an article on organic cotton in it. Now I have been fascinated with naturally coloured, organically grown cotton since I first read an article in the late 1970s about Sally Fox and her work developing the natural colours that cotton grows in. (I know I should have said "in which cotton grows." ) The concept and the ability to grow, harvest and spin cotton without chemicals, has been around in North America for at least 35 years - it's been in Peru and other developing nations for over 4,000 years - seems we're just catching up. Well here was an article in the October 30, 2006 - are we there yet? issue of Forbes on organic cotton. Now I know how they claim to be leading edge - they post-date (is that the right word?) everything.

So the article - a wopping 2 pages long - listed the big business names that had helped to get organic cotton where it is to-day - companies like - Patagonia and Levi Strauss. I mention them because they were there in the early 90s and lost a lot of money in their attempts to move organic cotton into the mainstream. Once there, of course, the others like Nike, Walt Disney and Wal-Mart picked up on it - no need to lose their money. The article went on in detail about the nasty chemicals used in the growing and processing of what is often referred to as "white" cotton and suggested that you may want to pay the premium for organic cotton - given - and they didn't say this- that the growing of white cotton accounts for 50% of world pesticide use!!

The article was written by Megan Johnston. Sally Fox was driven out of California by a lobby of white cotton growers. She was hassled for her work until, it appears, she had to give it up. I haven't googled Sally or looked her up in Wikipedia. I will and report back. I mention the author's name because this lobby of white cotton growers can be very subversive. Not that her name would actually show up in the "obits", it might just, well, never show up again.

More on Sally and the story of the other dustbunny that crossed my path. 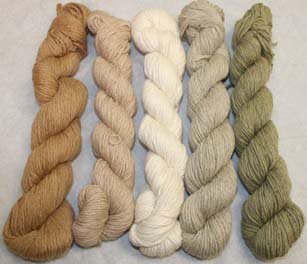 And as a foot - err - hand note. Infiknit has had organic cotton as a hand knitting yarn since the early 90s and yesterday I just placed my Spring 2007 order for hundreds of kilos of soft - naturally coloured(5 shades), chemically free yarn. They also serve who only sit and knit - I've said this before too.

Enjoy October - just 4 more days until we can chill out in November - I can hardly wait!

Carol
Posted by Carol Tomany at 8:26 AM