To the Big Apple without our MacIntoshes 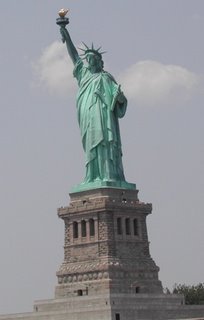 Yes, we decided to ignore the weather forecast last week that called for more rain along the eastern seaboard of the US - that is, more rain in addition to the rain that had caused considerable flooding in various NE states, including NY, and head to the "Big Apple" with the "kids".

The border crossing at Queenston/Lewiston at 3:00pm was a piece of cake - unlike one return journey where we spent 3 hours to travel 3 miles - how about "Knitters without Borders" - then again you have 3 uninterrupted hours to knit, unless, of course you are expected to play : eye spy, fish, any word games - like "keep the driver awake" - somehow a discussion of the nuances of fair isle doesn't cut it!

We arrived in Rochester - many apologies to the yarn store there with a pending order - when I travel with family - I am at their disposal, lest they dispose of me!

Anyway, we spent a great night there and then finished the drive to NY the next day - I have to pat myself on the back, as I was the last driver and therefore took the van down Palisades Parkway, over the George Washington Bridge, down to 47th St. and into Times Square, in rush hour, on my own. Piece of cake-NY cheesecake, of course!

I have to say I LOVE NY!! There is an elan there that really can't be found any where else in the world.!! We rarely slept - NY never does. We took the subway to Little Italy - even the Italians commute there. We went to Greenwich Village and I revelled in the fact that the tiny "hole in the wall" drinkeries, eateries, that nurtured Joan Baez, Peter, Paul & Mary, & of course Bob Dylan and many others were still there - different addresses, different venues, but still the same adventurous, spirit that nurtures all the Horatio Algers - rags to riches, talented "wannabees" - I love the ones who made it and wished that I could have heard from the ones that didn't quite - there is a little magic in everyone who sets out to try..and try...and try again.

As there were four of us, each one picked something that they wanted to see/do & we did it! Nicky wanted to see the Statue of Liberty - the boat ride was a little wild - it was the July 1 & 4 weekend - every country in the world was represented as passengers on the ferry but the monument was amazingly serene, steadfast, something enduring in the chaos!

I had to see the Guggenheim. I just felt that I had to be in a building designed by Frank Lloyd Wright and it was awesome ! What was also amazing was the bus ride up Madison Avenue from our Hotel to 89th St. on a quiet Sunday morning. I had a fleeting view of designer windows - like the passing of so many dreams - there for a moment and then gone. Still for any one interested, I saw a lot of tulle, layered and ruffled in the palest apricot, peachy pink tones on even paler white shadows of mannequins - imitating the fleeting celebrity figures that could afford them - there are some, perhaps many, who still lead a charmed life!

My magic is still relegated to unravelling yarn and sorting out errors in patterns - they also serve who only sit & knit.

After the art gallery we walked through Central Park - no major art installation there at the moment & too early for Theatre in the Park. There was, however, enough street theatre to last one for a lifetime - or maybe until the next trip, anyway. There were the usual park walkers, bikers, vendors, and come-by chancers - like the stretch Rolls Royce - the kids wouldn't let me ogle the hood ornament to see if it "curtsied" - the Queen's hood ornament on her Rolls curtsys - well it might have been royalty.

We continued down 5th Avenue and hit the hot spots - Niketown, the NBA store and the Disney Store - can you tell that I'm travelling with family? I craned my neck as we walked past Tiffany's - couldn't afford it anyway and arrived back at Time's Square - exhausted!

It was fabulous - even the part where the waitress spilled the beer on my head - it was an accident - the kids loved it, though and the part where Nicky got caught in the revolving cage-like turnstyle in the subway that didn't turn- I thought of that guy, Charlie on the MTA, who was immortalized in song. Why Nicky could have been there forever, with people passing sandwiches to him as they fled by! We were saved by a passing stranger who knew the ropes - err bars - and we freed Nicky!

Our next trip is to Hilton Head...I'll keep you posted!