A Cat for All Seasons 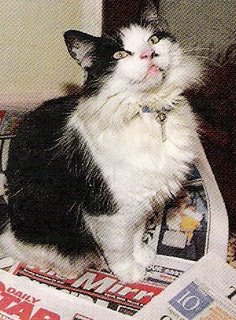 Perhaps you've heard of Sir Humphrey Appleby, the infamous cat of 10 Downing St. Well I hadn't and I was amazed to read an article about him in a magazine recently. Apparently Sir Humphrey has been around for a long time. He appeared one day at the front door of the aforementioned address, when Margaret Thatcher was in residence. Well forget about all this "iron lady" stuff, she was really a pussycat at heart - or at least she had a soft spot for cats, especially a lonely black and white Jellicle, without a calling card. He was admitted (I can almost see him winking over his shoulder as he entered). He wasn't given a mat by the fire, immediately, in fact he was sequestered at 70 Whitehall Rd., the accommodation officer's quarters, where he immediately took up the position of "Cat in Residence." This actually is a bone fide position dating from the time of Henry VIII.

Sir Humphrey brought such grace and feline wisdom to the position that he was often allowed to sleep on the floor during cabinet meetings. No doubt his very presence enhanced their decision making. It was never actually documented that he had had an audience with the queen, but he did receive fan mail from around the world and even had a poem dedicated to him.

Once, however, he went missing for several days. The tabloids went "wild", posting pictures of Sir Humphrey, writing columns extolling his virtues and pleading for his "return". Well - the cat came back. His picture right there in black and white (he was a jellicle) in the Daily Telegraph, showed the London Bobbie (policeman) who had picked him up as a stray and brought him home-Sir Humphrey had a charmed life- that he really was a cat of renown and needed to get back to his duties. Once back at Whitehall he lived through the terms of a Prime Minister or two until he met the equally infamous - drum roll please - Cherie Blair, wife of the current PM, Tony Blair.

Sir Humphrey was "let go", no ejected somewhat unceremoniously onto the street from whence he had come so many years before. I can almost hear Cherie Blair repeating the words of Lady Macbeth on hearing of the murder of Duncan, "What in our house?" 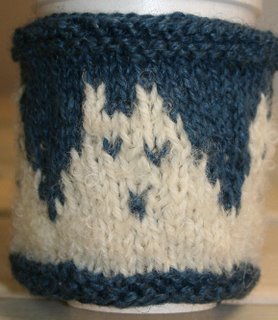 Alas, sad indeed, that someone so wonderful could meet such an ignominious end. But wait, what's this. A photographer, a host of journalists, an invitaion to return? Yes, apparently, when an article appeared in yet another paper about Sir Humphrey' s eviction, the British public was aghast and demanded his reinstatement. Ms Blair was forced, I guess is the only word, into a photo op, posing with Sir Humphrey in her arms saying "Nice Kitty, it was all a bad mistake". I can see him winking again.

With that, he was allowed to stay and live out his days among the elite. Sadly, though, after 17 years of notoriety, Sir Humphrey died in March of this year. Cheers to a life well lived.

I have decided to dedicate my first coffee coat to Sir Humphrey. Sorry the cats aren't black and white; but really, it's the spirit that counts.

I used 4mm circular needles and worsted weight yarn. It's a little bigger than I wanted, so it will go on a large coffee cup. I think it was the short circular that was the struggle. You may want to use a set of 5 dps or knit it straight and sew it together.

Cast on 36 sts. Knit 2 garter stitch ribs (4 rows). Change to main colour (white) and increase 1 stitch every 9 sts. (40 sts on needle) Begin graph. The first stitch in the background colour is knit the first round and then purled the second round. I think that it makes a better nose. Then a row or so later the "nose" stitch is increased to create 2 stitches separating the eyes. When the graph is completed. Knit 3 more rows in the background colour, increasing 1 stitch every 12 stitches in the last round. (52 sts. on the needles) Work 2 more garter stitch ribs, cast off and drink a toast to Sir Humphrey. It works for cold drinks too. 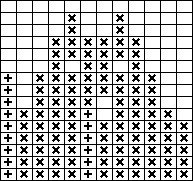 Have a good one. Carol