These boots were made from talking 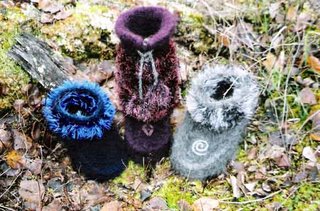 A number of designers contacted me by e-mail to suggest what goes on in their minds when they design. (A little different, perhaps than what goes on in the knitter's mind when they knit the design.... maybe not) Their comments are as unique as their work. Jennifer Appleby of The Woollen Earth was the first who said:

I think I sometimes have a starting point…either a yarn to use (sometimes the yarn just begs for certain “themes” and other times the texture or color triggers a design), or demand for a new sock pattern, or a cute little girl staring at me, just NEEDING a cutesy little hat to wear for winter; 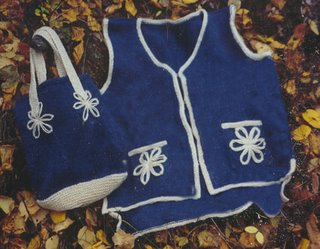 At other times I just “have an idea”…never know what sparks it, never in a convenient spot to sketch it out…and it usually ends up a far cry from the original “flash” by the time it becomes a leaflet or is sent off as a design proposal to a magazine. One exception was my recent contribution to the Spring 2006 Interweave Crochet…I just ‘had an idea’ for beach sandals, grabbed a ball of sisal off the laundry shelf (I had it for more mundane tasks), and feverishly worked away at the sandal until it was DONE, 2 hours later…and that original sandal didn’t change, except in yarn (which the magazine chooses) to the very end. (I love shoes.) That really hardly ever happens. (And you should have heard the comments going around among the male members of my extended family as to shoes out of sisal or jute…no vision, those guys. )

I find it really is like the twists and turns of conversation…hard to trace the thread, but one thought leads to another and another, and in the end (usually after a lot of ripping out), the finished design has emerged! " 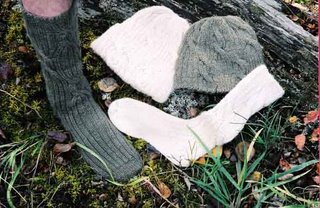 Thank you so much Jennifer. To date Jennifer has been published in many knitting and crochet magazines. You may even have knit one of her designs. Check them out below

At top is Felted Mukluks, one of my favourites. Next is Les Fleurs, close to the original of a design that changed a little for a magazine and finally at right Salty Sea. Jennifer lives in northern BC...can you tell that from her designs?

All of Jennifer's leaflet patterns may be seen below.

Can't wait to start that sandal - now you've got me talking err thinking - spa sandal in organic cotton? Another in black for the evening... We love your designs - just keep on talking!!!!

Enjoy Carol
Posted by Carol Tomany at 6:51 AM