Of Omens and Ominous Knitting

To night at about 6:30pm, as I was bringing my youngest home from an after school class, I looked into the sky. I often wonder if these seemingly vague glances at the heavens are really a lot like casually looking at one's watch - just a quick check or re-aligned with the universe. (What time is it really? or what is the real time?) However small or minute we may seem to be, we are actually part of a really grand system. For me being a small part of something really immense and enduring is sometimes enough.

Well, tonight in the evening sky there was the "new moon with the old moon in her arms." It is the very sliver of the new cresent moon, the reflected light of which makes almost visible the old or non-lighted moon. It is an old country expression and an old country omen.

Somewhere in the poem, the Ballad of Sir Patrick Spens, which I am sure most of you where forced to read, there is a reference to this moon. It can appear on a clear and cloudless night after a particularly beautiful day, as it did before Sir Patrick Spens set out on his ill-fated sea journey. It is the sort of day when you think that absolutely nothing could go wrong!...NOT

I wonder if the same omen was in the sky on the eve of the sinking of the Edmund Fitzgerald - a sea voyage also made famous in ballad form - surely we are all connected.

What has the future in store?..... Well, my husband - the weather forecaster in the family- informed us that we are in for an unusually cold and wet March - I can hardly wait! I missed the celebration of March 1 - St David's Day - due to writer's block and the usual complication of business legal work - is this the ghost of Dylan Thomas extracting its revenge? I had no new knitting on the needles for the hour wait during my son's class - Sally Melville says she always has at least 3 projects on the go - now I know why I will never be organized enough to come close to the stature of Sally Melville! 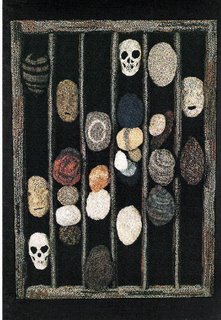 To-day I was also duped by and old e-mail hoax - post office pushing through legislation to tax e-mails. I am not sure whose ghost this was - Phony Express maybe.

Anyway, because I had no knitting, I started reading "The Princes of Ireland" in the church basement where my son has his class. I might have been reading by candlelight - not the romantic kind - the I can't read the fine print kind.

Anyway, knitting being the therapeutic, uplifting sort of activity that it is, leaves one with few examples of the negative. I was able, however, to find in my cache of Debbie New cards, one that is difficult to send to anyone. It does, however, fit the day - and this is the day BEFORE the actual omen becomes reality - I can hardly wait!!

Debbie took her inspiration for Pebbles Trapped in a Grate from a poster published by Amnesty International - may knitting free us from our bondage. I did have an occasion to send this once to a supplier - my bank messed up and failed to honour a cheque. It expressed my opinion of the bank that day. Pebbles Trapped in a Grate expresses my opinion of March 1 and the weather forecast predictions - caged for another 30 days!

PS All aspects of Pebbles is knitted. Quite amazing
Posted by Carol Tomany at 8:54 PM