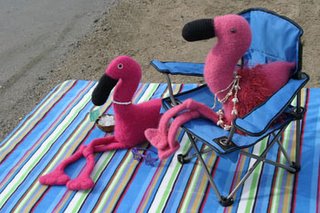 I am always amazed at how inter-related people, events - well life in general - really is. I was looking at renting new space for Infiknit and I met a Real Estate agent which Marsha White of The Needle Arts Book Shop had recommended. At the end of our meeting, John asked me if I knew Paula Lishman. Many of you will know Paula as the "fur" lady. Years ago Paula discovered a way of cutting fur pelts into fine strips to make yarn. Knitting with fur became a reality - an expensive reality at $100.00 or more per gram; but for those who wanted to, there it was

I knew of Paula, but I did not know of her husband. Well, Bill Lishman, I discovered is the brains or the insanity behind "Fly Away Home." A film about migratory birds that was bought by Disney. You've probably seen it, my kids have seen it, in fact everyone I talked to had seen it, except me - just added it to my must see list!

For those who haven't seen the film, Bill Lishman's hobby is training migratory birds to fly with his intervention. Anyway my issue of Canadian Geographic arrived and there on page 11 was an article about Bill working with endangered Whooping Cranes in Wisconsin. He is trying to train them to fly to Florida to establish a breeding colony.

Bill (Father Goose as he is sometimes called) actually flies an ultralight aircraft that looks a lot like a bird with a propeller on its nose. To make him look more like a bird, when it comes time for the actual journeys, he and the others working with him don white bird costumes. Now this is pushing the envelope. This is living your dreams in a most amazing way. I think it comes pretty close to the sublime. It's not knitting, but then a fur scarf in Paula's yarn may also be pretty sublime.

According to my real estate agent the Lishman "kids" are just as wildly creative as their parents. Can you imagine the family at di 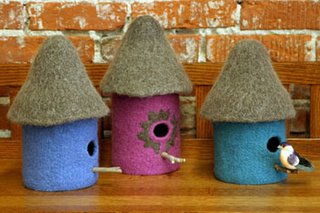 nner - that's if they ever have time to sit down together

Above is a knitted, felted Flamingo(no knitted whooping Cranes, sorry) from Fiber Trends. Start your own breeding colony. Even house them in these fancy flats also from Fiber Trends. Sorry no pink elephants, but then I don't think that Bill intends to train elephants to fly - at least I hope not. Anyway Disney has already done a movie about a flying elephant!

PS Coffee cup holders can be felted too! Please read the previous post and send on a photo of your original design!
Posted by Carol Tomany at 7:47 AM