Venus is the goddess of Love. Her other name is Aphrodite - may have something to do with aphrodisiac - not sure? I mentioned in my last post that Dorothy Siemens of Fiddlesticks Knitting has just finished a gorgeous garment called the Venus Vest- the graphs are being checked at the moment and the pattern should be available very soon.

I asked Dorothy about the finished project. She said that she was very pleased with it, although it was a difficult "birth." I think that you should hear directly from the artist how much labour and love went into this creation.

In her blog of Monday, February 6, Carol muses on birth-the birth of a child, the birth of myth and the birth of an idea. She asks, from where do ideas come, what goes into the birth of a new design? She mentions one of my newest designs, soon to be released, which I've called the Venus Vest. I honestly can't say how this idea arose in my head. Like Venus rising from the sea, it just suddenly appeared in the middle of the night.

I spend a lot of time looking through books about ethnic clothing, wearable art, and yes, knitting magazines and books. I believe that many of the images percolate in the subconscious until a quiet moment when an idea will burst forth, seemingly spontaneously, but in reality, the b 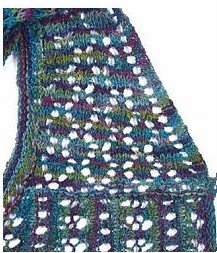 rain has been working away behind the scenes. It seems almost magical at times. My idea for the Venus Vest was a bit different from what was ultimately designed. This is not unusual, in that many of my designs start as one thing and morph into another as I swatch, chart and work. The concept of an all-lace vest was retained throughout the process, though. I originally thought of it as having Empire styling, with one lace pattern ending below the bust, where the vest would nip in, and another lace pattern over the bust to the shoulders. This proved difficult to design, though, as under-bust measurements are not standardized, and furthermore, neither are busts!

I consulted my friend, Fiona Ellis about this problem, and she suggested I consider a higher line where the lace patterns changed. This made a lot of sense and had the added advantage of being much more flattering to a greater number of female figures. Now the vest could flow over the body gracefully. My original idea was to knit the lace for the body from side-to-side, so that any striping of the hand-dyed Fiddlesticks Knitting Country Silk would be vertical on the body. It also eliminated the need to sew seams at the sides, making the body all one piece from one front edge to the other. I experimented with lace patterns, since I wanted them to run vertically also. Finally, I incorporated a sawtooth lace edging at the bottom, also knit right along with the main piece. The bodice lace, a different pattern, is picked up from the body and knit to the shoulders. The only seams to sew are the shoulders, and all edgings except for the armhole edgings are knit along with the body or bodice. This followed my original concept for a vest that needed minimal sewing up. 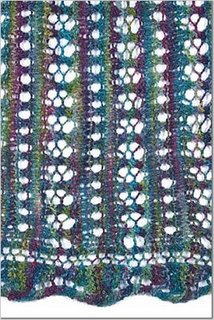 When I write about the steps I took to design the vest, it sounds easy and quick to do. In reality, I struggled with this design, as one would with a difficult labour, before I was finally able to give birth to it. Working out the bust sizes from 35 to 54 inches, in lace, with charts for ease of working, proved to be extremely time-consuming also. But once my sample was completed, I was very happy with the result. I feel that the design meets my expectations for ease of knitting and a feminine attractiveness on a variety of figures. The name stumped me for awhile, and Carol suggested I look at mythology for inspiration. I thumbed through my thesaurus and found "Venus." It seemed just right-a graceful name, for I hope, a graceful, feminine design, rising from the sea of my subconscious to become another Fiddlesticks Knitting offering.


Thank you so much Dorothy for taking the time to write about your source of inspiration and the design process for your very elegant Venus Vest - definitely worthy of a goddess! I know that other designers will enjoy and connect with your experiences. I also know that these details will add to the knitting experience for anyone choosing to create for themselves "The Venus Vest". Keep checking Dorothy's website - the pattern and kit should be ready soon.

We also have a winner in the details of the birth of Venus - this time the goddess - question. Knitti-me wrote in the comments of yesterday's post the following:

Regarding the birth of Venus, according to Greek mythology the Titan, Kronos castrated his father Ouranos and then cast the severed genitals into the sea. From the foam that gathered around the member, Venus or Aphrodite (in Greek) emerged, fully formed. 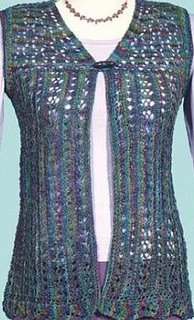 If not fully clothed...never mind, dear, you'll look stunning in this.

Knitti-me, please send me your address so that I can send you the skein. info@infiknit.com

Still no takers for the organic cotton offerings. Where have all the poets gone?

Have a good one