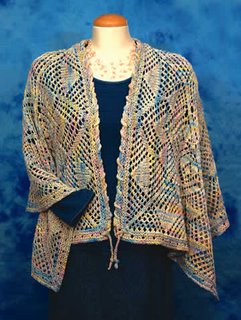 Thank you, Knitti-me for your request to see something done in Opal the colour that I suggested most resembled a seashell for the Venus Vest pattern. Kaleidoscope Wrap is knit in Opal. The soft peach tones melt into beiges and creams with hints of pink and blue. The dyer has tried to capture that gorgeous pearlescence that we see when we turn over a seashell after its occupant, the chambered nautilus, has left. Hope you like it!

Of course, I couldn't leave you with out a look at Debbie New's take on seashells. Here is her card entitled "Renaissance". Again the rigid form of the seashell made soft by the knitting, surrounds a knitted bather - perhaps Venus resting. Everything is so serene; but underneath there is a lot of activity. Debbie was experimenting with certain mathematical formulae - fractuals - in her development of the spiral shape of the shell. Debbie decided to knit her shells as they grew. They are, says Debbie in "Unexpected Knitting", self-similar shapes that retain their form as they grow. Perhaps there is a lot of activity going on in the mind of the bather too.

Debbie's cards are available from Philosopher's Wool. Finally, I could not finish without a mention of The Chambered Nautilus by Oliver Wendell Holmes. Again, there is a lot going on. Shells are amazing structures. I think that a knitted beach bag in the shape of one might be very interesting.

This is the ship of pearl, which, poets feign,
Sail the unshadowed main,
--The venturous bark that flings
On the sweet summer wind its purpled wings
In gulfs enchanted, where the Siren sings,
And coral reefs lie bare,
Where the cold sea-maids rise to sun their streaming hair.

Its webs of living gauze no more unfurl;
Wrecked is the ship of pearl!
And every chambered cell,
Where its dim dreaming life was wont to dwell,
As the frail tenant shaped his growing shell,
Before thee lies revealed,
--Its irised ceiling rent, its sunless crypt unsealed!

Year after year beheld the silent toil
That spread his lustrous coil;
Still, as the spiral grew,
He left the past year's dwelling for the new,
Stole with soft step its shining archway through,
Built up its idle door,
Stretched in his last-found home, and knew the old no more.

Thanks for the heavenly message brought by thee,
Child of the wandering sea,
Cast from her lap, forlorn!
From thy dead lips a clearer note is born
Than ever Triton blew from wreathed horn;
While on mine ear it rings,
Through the deep caves of thought I hear a voice that sings:--

Build thee more stately mansions, O my soul,
As the swift seasons roll!Leave thy low-vaulted past!
Let each new temple, nobler than the last,
Shut thee from heaven with a dome more vast,
Till thou at length art free,
Leaving thine outgrown shell by life's unresting sea!