Born somewhere between Bloor and Wellesley

My husband came home last night to say that a child had been born on the subway some where between Bloor and Wellesley. Now I have always considered one's lot in life to be primarily an "accident of birth". I know for many parents, birth is not an accident. It is generally a considered undertaking, with lots of preparation, lots of pain, lots of joy... all that goes into a moment we call life, which we actually happen to give at that moment!

I thought of the accidents of birth in literature. The first that came to mind was Ernest - from "The Importance of Being Ernest" - Oscar Wilde. He was found in a handbag at Victoria Station in London. Another "underground" or subway birth. Now Victoria station is where you get the train to either Brighton or Calais. Why Ernest could have come from anywhere - quite shocking when you think of it!

Then there was that accident with Leda and the swan. Well she ended up giving birth to Helen and her twin sister. Helen was, of course, Helen of Troy - the face that launched a thousand ships - another transportation story. 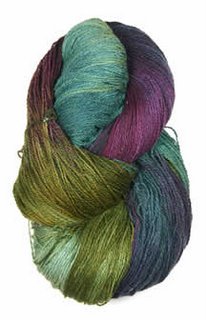 In fact, just the other day, I was musing about the birth of Venus. Dorothy Siemens of Fiddlesticks Knitting was trying to think of a name for a new vest design that she had been working on- completely finished now, almost ready to go!! I suggested something from mythology and Dorothy decided to call it the Venus Vest. If you can remember "The Birth of Venus" from the fabulous painting by Botticelli, you've got the idea. Watch for this mythical vest in Fiddlesticks Knitting Country Silk!!!

One skein of Sari "Rainbow" Silk to the first person who can post in the comments the details of the Birth of Venus. (That is: Why Venus 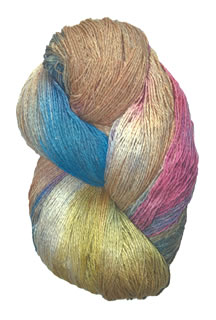 was born in the sea?)

The Venus Vest brings me around to thoughts on the birth of ideas. Art is often considered the offspring of the artist and the gestation period varies from seconds to decades, but ideas have a conception - what causes that? and works of art have a birth - most often in a studio - but still they have been developed and nurtured over many months or many years - with much pain and\or joy. What do we use to nurture these ideas? What does the womb consist of? (OK. Of what does the womb consist?) What do we feed them? Are they genetically similar to the artist or born of an alien source like the swan?

The pictures are hanks of Marrakesh and Opal yarn from Fiddlesticks Knitting Country Silk. Dorothy has designed the Venus Vest in Marrakesh and I added Opal which is the colour of the seashell in the painting by Botticelli. Clothe yourself in Art!

Now about that baby that was born. I am happy to report that it's a girl who will be named "Mary". Can anything be more classic? She is fine, as is her mother, father and 3 siblings. They were all apparently on the way to the hospital when Mary decided to join them - ex utero.

Well fortunately there was another passenger, who recognized the mother's condition. (All had actually reached the platform at Wellesley station by that time.) Thankfully, this Good Samaritan, who had never actually delivered anyone else's children before, just her own, assisted with Mary's delivery, while Mary's father tried frantically to get someone to call 911. Now this is morning rush hour with hordes of people rushing on and off the trains. You would think that someone might have noticed and helped - not even the subway official, the one who makes sure that everyone gets squished into all those trains, had time - it took 3 more trains to get someone to call 911.

Another call, this time to the hospital, suggested that they tie off the umbilical cord with a shoelace. Again, it took a lot of coaxing and a few more trains to get someone to part with their shoelace. All of us are forever grateful to that person walking around town with 2 shoes and 1 shoelace! Well, Mary, I think that you will just have to grow up to be a very important person and show all these indifferent people, what life is really about!