I just visited Wikipedia to-day. I know I should have done it ages ago and in deed I have been meaning to ever since I read about it in a business article. The article was actually a comparison between Encyclopedia Britannica and Wikipedia. For those of you who aren't familiar with Wikipedia, it is a free on-line encyclopedia that is being constantly updated by those who visit - yes that means you or me, if we think that a little piece of information is missing or needs clarification or whatever.

Of course, I went to look up knitting. It was amazing - so clear, so fresh, so up-to-date and so detailed. I felt that I was in a newly opened yarn store or a yarn store that may have been around for eons but had kept up with all the changes and maintained a very fresh face with all the new ideas. I just read the basics. If I had read every click through to explain every concept - i.e. yarn, fibre\fiber ( both spellings) intarsia etc. I would have been there a week - I'm a slow reader but....so much information and links that referred you to sites that would teach you how to knit ...it goes on and on. The article actually reminded me of a yarn store that I sell to in Vernon BC - "The Never Ending Yarn". I told Marianne one day that I loved the name of her store. She said well really it is a comment on the state of the art - maybe even a state of the art comment, who knows, but it goes like this:

Take heart! A friend of mine passed away a year ago last December. She had quite a number of unfinished projects left. Well a neighbour, who also had a closet full of unfinished projects, dropped by to ask if there were anything she could do. Of course the family - which was actually just my friend's mother, who is well into her 80's said - no, thank you, your thoughts are help enough. Well this amazing neighbour asked if she would like her to finish the unfinished projects. Now this has to be a gesture not of this earth. I think that it comes pretty close to the sublime.

I understand that 3 or 4 projects have been completed with more on the way. So knit away. If not finished in this life - maybe in the next!

Oh, yes back to Wikipedia. Well, to put my experience of my first visit to the Wikipedia site into words, I have to say "wicked", as my 12 year-old would say of the snowboarders who push the limits of their art.

I am constantly "blown away" by the possibilities of the internet. I often think that Marshall McLuhan should be alive to-day to see his prediction of the global village a reality with so much more. 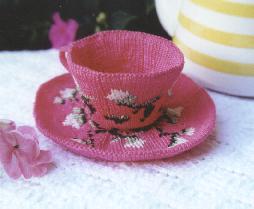 In the meantime Debbie New contacted me with her
e-mail address and a definite OK to post pictures of her tea cups - not this one - which I will do tomorrow, I hope. No this is a pattern I did after Debbie taught me how to knit a teacup. It's called Tea Roses and it is me pushing the limits of my ability in knitting.

Debbie is pushing her (our) limits again. She said that she is working on a series of things that are changeable. Perhaps simple mechanical things or other means of altering or playing around with knitted things. I said that I had fixed a mortis lock on the weekend - but it wasn't knitted - somehow I don't think that this qualified!

It does, however, remind me of an old joke - a real estate agent trying to sell an ancient & reportedly haunted house was searching around for the key, when his colleague said - don't worry - it's a mortis a skeleton will let you in. Sorry, I couldn't resist.

Have a good one.
Carol
Posted by Carol Tomany at 1:05 PM