The Prayse of the Needle

Somehow I felt that the coracle posting needed a poem. I googled up "knitting poetry" and came across Jean Moss' site http://www.jeanmoss.com I think that the muse may be very close at hand here. Take a look, if you have a minute.

I also found this poem, which is old and charming and probably very close to a knitter's heart. It is so good to feel connected to an ancient art form, which we bring to life daily.

The Prayse of the Needle
To all dispersed sorts of arts and trades
I write the needles prayse (that never fades).
So long as children shall be got or borne,
So long as garments shall be made or worne,
So long as hemp or flax, or sheep shall bear
Their linen woolen fleeces yeare by yeare,
So long as silk-wormes, with exhausted spoile,
Of their own entrails for man's gaine shall toyle,
Yea till the world be quite dissolv'd and past,
So long at least, the needles' use shall last.
John Taylor 1580-1653

I also thrashed around - literally - for some "old" knitting. Well the best I could do were some swatches done in organic cotton. "Old?" you say. Well given that the organic cotton that I distribute now comes from a mill which is overseen (is this a word?) by an anthropologist, because it processes cotton that is grown now the way it was, and always has been, 4,000 years ago. Hate to tell you that they are still operating on the time lines established back then too. I order in April for June and it arrives in November. Who knits with cotton in November? 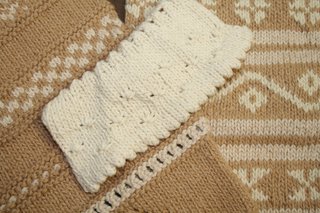 Some of these were actually made into garments.

The pretty one on top hasn't been developed yet. Maybe its time has come. The fair isle in back is a crew neck pullover. The one on the left became Gingerbread Vest. I often thought that some simple baby outfits would work in organic cotton.
May 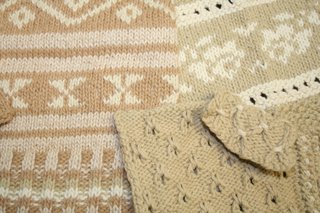 be that's what the top one will be. 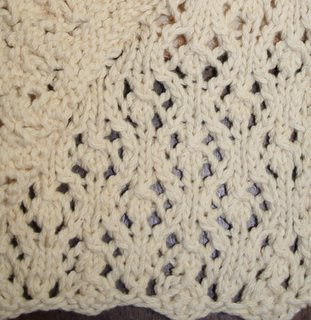 clippings from the cutting room floor.

I actually really like this stitch to the left. It reminds me of the Celtic cross. Maybe some day. But in the meantime, it's Friday and the house gets cleaned - I use the term loosely - on Saturday. No skiing this weekend, it's been too mild and the temperature is going to drop so that the hills will be sheets of ice. I also have a music project on Louis Armstrong to finish - well it's not really my project, it's my son's, but guess who gets to do the prodding and half the work. Hope to post over the weekend. Have a great one!